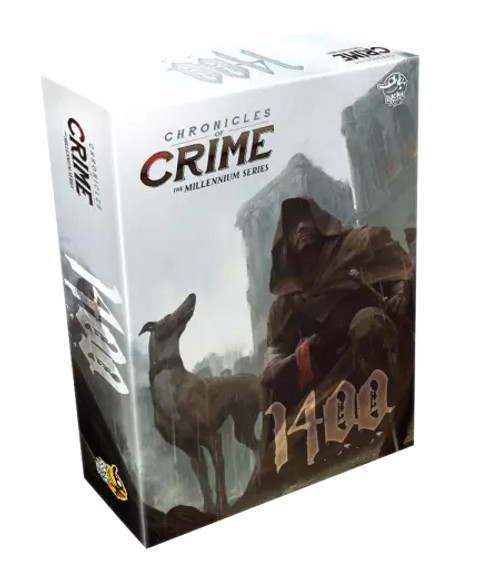 Chronicles of Crime: 1400 is a stand-alone, cooperative game of crime investigation. Using Scan & Play technology to mix digital and board games, it allows for many crime investigation stories to be told with the same components.

Take on the role of Abelard Lavel who, blessed with prophetic visions, has taken it upon himself to root out evil in the city of Paris. At the start of each new case, you'll be presented with glimpses of visions that Abelard has seen. Features seen in these visions might be familiar, however, they could also be completely unknown, or even, have not yet taken place!

It’ll be down to you to make the connections between the visions and reality and put the pieces of the puzzle together.

Interrogate the suspects, collect evidence, and find the culprit before you run out of time! This game requires an app to play, but once downloaded no Internet connection is needed to play. You currently need Android 4.4 or newer, or iOS 8.0 or newer to run the app. One of our personal favourites! For 1 to 4 players, ages 12 and up with a 60 to 90 minute playing time for each session.

The Fox in the Forest