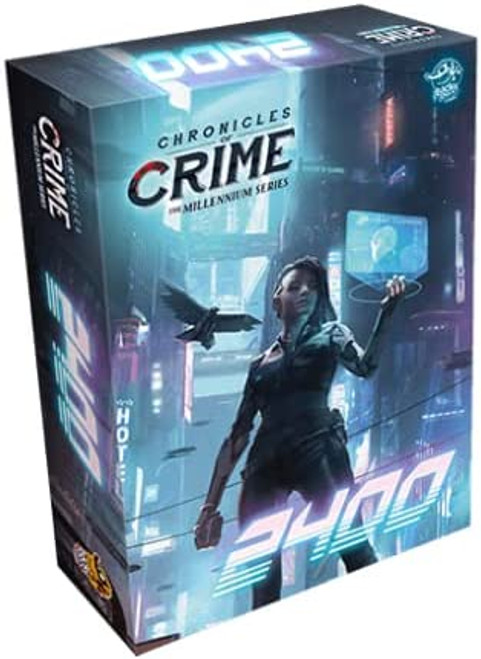 "Chronicles of Crime is an award-winning cooperative game of criminal investigation mixing a board game, an app and a touch of Virtual Reality. You and your team will be put on crime cases, moving all around town, interviewing suspects or witnesses, and searching for clues in 3D scenes!

Chronicles of Crime: 2400 is a standalone game for 1-4 players, which presents a new world where androids indistinguishable from humans walk the streets of Paris and cybernetic implants have become part of everyday life. Players will explore the city like never before, from the slums and underbelly of a suffering population to advanced corporation structures and a gargantuan translucent Dome with its luxurious lifestyle held within.

Throughout each case, players will have opportunities to enhance Kalia with cybernetic implants. Super-senses that help them find evidence, a tomograph to quickly scan suspects, or maybe a zapper to neutralize problematic electronics?

The future is full of useful tech but the technology is not always on the player’s side and the people they speak to may not always be as they seem. Venturing into Cyberspace and the virtual world will challenge players further as they deal with avatars and the difficulties of an electronic landscape.

This game requires an app to play, but once downloaded no Internet connection is needed to play. You currently need Android 4.4 or newer, or iOS 9.0 or newer to run the app.

1000 piece Jigsaw puzzle: Home is Where the Dog Is